Municipal bonds are attractive after-tax investments for those in higher tax brackets.

They do a better job of diversifying stock risk than corporate bonds.

Closed-end municipal bond funds may be even more attractive when trading at a discount to NAV.

AFB is trading at an unusually large discount. 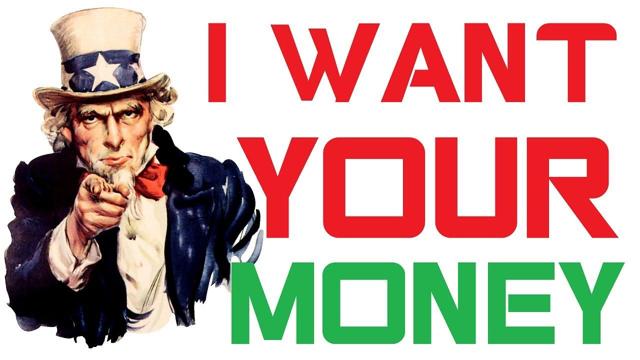 April 15 may be behind us, but its not too soon to start planning ahead for 2019 taxes. Municipal bonds are attractive after-tax investments for those in higher tax brackets and do a better job of diversifying stock risk than corporate bonds. Although attractive national muni bond ETFs are available, closed-end municipal bond funds are currently selling at above-average discounts to NAV and may be an especially attractive way to invest in the space. In particular, AllianceBernstein National Municipal Income Fund (AFB) is selling at an unusually large discount of 12%. In addition to its attractive distribution yield and moderate level of interest rate and credit risk, buying its assets at 88 cents on the dollar makes it an especially appealing investment for high tax bracket investors. If the NAV discount reverts back toward a more normal level, which my research indicates is likely, it will be icing on the cake.

To determine if municipal bonds might be an attractive investment for you, the first step is to estimate your marginal tax rate. This is the rate that you will pay on the last or marginal dollar of income (not your overall average tax rate). The table below is provided by theTax Foundation: 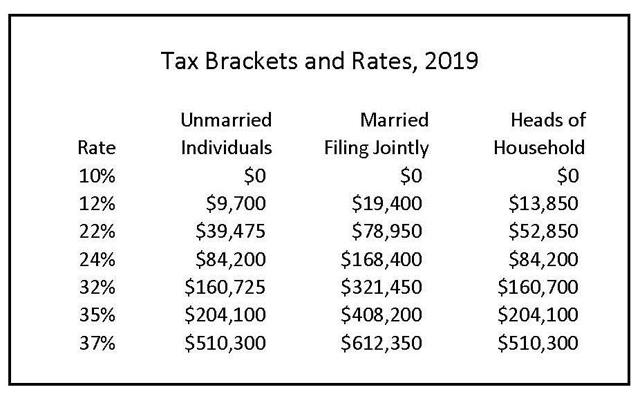 For those whose income puts them in the top three brackets, chances are that some allocation to municipal bonds will make sense. Note that the table above applies only to federal income taxes. Most states also tax bond interest income. However,most statesdo not tax interest on municipal bonds issued by municipalities within their own state, including bonds issued by the state itself. Investors instates with high tax rates, such as California, New Jersey, and New York, often find it most attractive to invest in municipal bonds or bond funds that focus on their state. This article will focus on national municipal bond funds. However, if you are in a high-tax state, you may find that investing in a fund focused on your state will be more attractive. 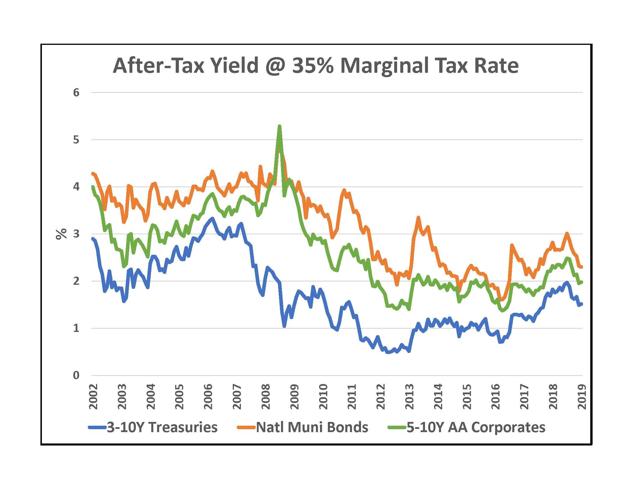 The graph above compares yields for the overall municipal (muni) bond market (using the Bloomberg Barclays Municipal Bond Index) to Treasury and Corporate indexes with a similar level of interest rate risk and (in the case of corporates) credit risk. (Over half of the muni index is rated AA, with most of the remaining bonds one notch above or below that level.) The after-tax yield is presented assuming a marginal tax rate (MTR) of 35%, the midpoint within the highest three brackets. At that MTR, as of April 30, 2019, the after-tax yield on the AA corporate bond index was 1.98% (3.04% before-tax yield x .65%). The yield on the muni bond index was 2.30%, or .32% higher. 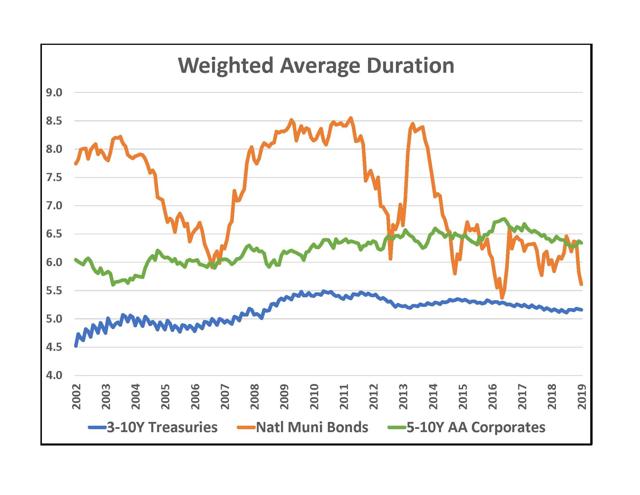 The level of interest rate risk, measured byduration, has moved around quite a bit for the municipal bond index. Fortunately, at present, the interest rate risk for the muni market is lower than average and also lower than the 5-10Y AA Corporate Index. As of April 30, 2019, the muni market index had a weighted average duration of 5.6. This indicates that if interest rates were to move up by 1%, the index would be expected to lose 5.6% of its value. By comparison, the duration of the 5-10Y AA Corporate Index was 6.3. So, at an MTR of 35%, municipal bonds offer a higher after-tax yield with a similar level of credit risk and a lower level of interest rate risk.

Theprimary riskin nearly all portfolios is stock market risk. That is the risk that needs to be diversified. The way to statistically measure the diversification benefit of an investment is itscorrelationwith the stock market – the lower the better. Municipal bonds have a lower correlation with stocks than corporate bonds, so they do a better job of diversifying stock market risk, though not quite as low as Treasury bonds. 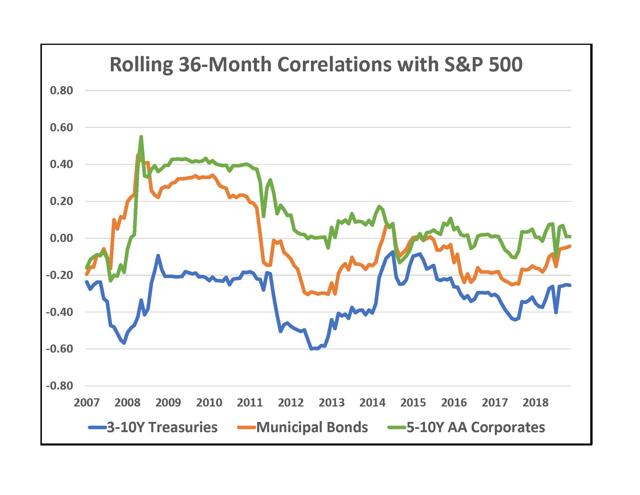 There are two very large and liquid low-cost national municipal bond exchange-traded funds (ETFs) that are quite popular with investors: iShares National Muni Bond ETF (MUB) and Vanguard Tax-Exempt Bond ETF (VTEB). Their expense ratios are .07% and .08%, respectively, and their respective average bid-ask spreads are .01% and .02%. Both are passively-managed index funds based on the same benchmark index: S&P National AMT-Free Municipal Bond Index. Consequently, their characteristics and holdings are highly similar. (It used to be that the expense ratio for MUB was noticeably higher at .25%, but on June 4, 2018,iShares cut the expense ratioto .07%.)

There is also a large and liquid short-term municipal bond ETF: SPDR Nuveen Bloomberg Barclays Short Term Municipal Bond ETF (SHM). Its expense ratio is .20%, and its average bid-ask spread is .02%. It has a lower level of interest rate risk, as measured by duration, but its yield is also quite a bit lower than the two broad municipal bond ETFs. 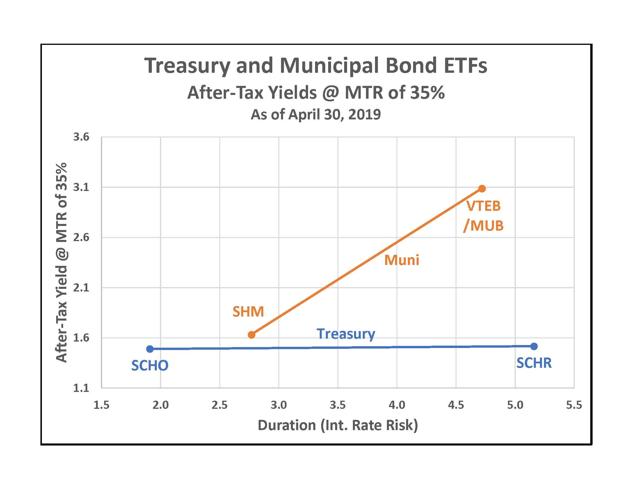 The demand for short-term municipals bonds is so high that it has driven down the yield on that end of the yield curve. This makes intuitive sense because most broad muni funds, especially those that specialize in a particular state, have a relatively high level of interest rate risk (duration). Many investors are concerned about rising interest rates, which could negatively affect longer-term bond funds. So, they may combine a longer-term muni fund with SHM (or something similar) to drive down their overall duration. However, given the very large give-up in yield, it appears that muni investors may be better off looking for other investments to lower their overall interest rate risk.

Another possible way to invest in municipal bonds is through a muni bondclosed-end fund. Closed-end funds (CEFs) are mutual funds that have a fixed number of shares and trade during the day on exchanges like stocks. They differ from open-end mutual funds that are bought and sold in direct transactions with the fund company at the funds net asset value (NAV) – the value of the underlying portfolio. In this respect, they are similar to ETFs. However, because ETFs can easily increase or decrease shares outstanding, ETFs trade at prices very close to NAV. Closed-end funds often trade at prices that differ from NAV by a substantial amount-usually at a discount.

Because institutions such as closed-end funds can borrow at much lower interest rates than individuals, owning closed-end funds is an economically attractive way for individual investors to obtain leverage. As long as the rate paid on the debt is lower than the return on the assets purchased with the debt, the fund will enhance its return with leverage. If the opposite is the case, the fund will magnify its losses. The use of debt increases the risk of a closed-end fund, but in a controlled and rational way. About two-thirds of closed-end funds utilize some form of debt. It is more common for bond funds to use debt and less common for equity funds. 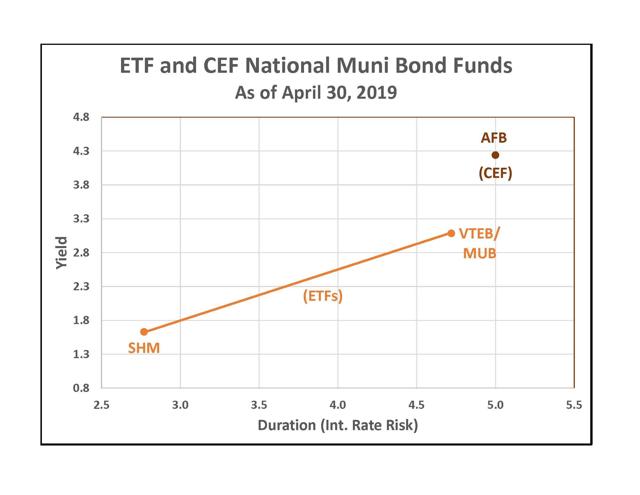 One attractive municipal bond closed-end fund is AllianceBernstein National Municipal Income Fund. It has a management fee of .86% (it is actively managed, as are all closed-end funds) and an average bid-ask spread of .12%. On April 30, 2019, the funds NAV was $14.75, and its closing price was $12.98, or a 12.0% discount to NAV. This is one reason that the funds yield is noticeably higher than those of the competing ETFs at a similarduration.

Another reason for the high yield (called thedistribution rate) is the fact that AFB utilizes 41% leverage, nearly all of it in variable rate preferred shares. AFB reports interest expense of 1.04% as a result of leverage, which adds to its overall expense ratio. Adding in other expenses of .12% sums to an overall expense ratio of 2.02% for AFB. Its distribution rate was 4.24% on April 30, 2019. At a marginal tax rate of 35%, that equates to a taxable yield of 6.52%.

However, at Sapient Investments, we are expecting an even higher return than that, primarily because of the 12% discount to NAV. That was the second-highest NAV discount among the 82 national closed-end muni funds in our database. Our research indicates that this unusually large NAV discount is likely to shrink in the months ahead, providing a boost to AFBs return. 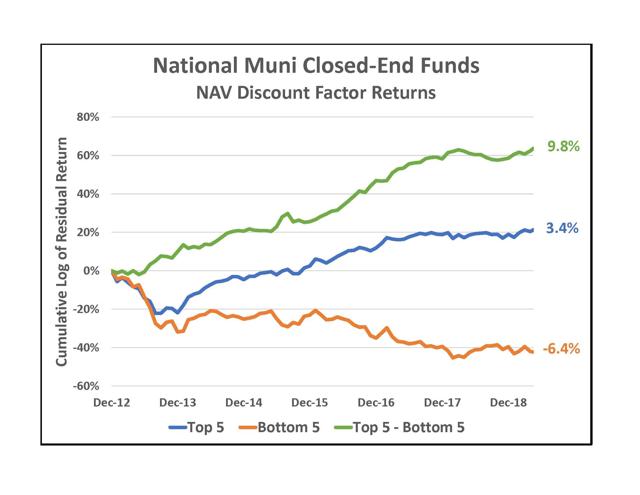 The graph above illustrates one of our research tests. The blue line is the cumulative log of residual return (net of our proprietary four-factor risk model) of an equal-weighted portfolio of the five national muni CEFs with the largest NAV discounts. (Log returns mean that the slope of the cumulative line has the same meaning all along the left-right axis.) The portfolio is rebalanced monthly. Since 2012, the average log of residual return (net of risk effects such as equity market and interest rate betas) has been 3.4% per year on average. Note that it is not cumulative total return that is being measured but the log of cumulative residual return. The distinction is vital. The much of the return for muni bond CEFs is systematic return, especially return derived from a CEFs sensitivity to interest rates. Residual return is the return that is left unexplained by a CEFs systematic risk factor sensitivities and, as such, is a measure of alpha.

The orange line is the same thing but investing in the five with the smallest (or most negative) NAV discount. That return has been -6.4%. The green line is a long-short implementation of the strategy. Its return has been 9.8% per year. The results have been both strong and consistent.

In summary, AFB provides a tax-free yield of 4.24%, which is a taxable-equivalent yield of 6.52%, assuming a marginal tax rate of 35%. Its duration of 5.0 is somewhat below that of the overall bond market as measured by the Bloomberg Barclays U.S. Aggregate Bond Index duration of 5.8. (The yield-to-maturity of the Index is 3.02%). So, AFB has a higher (tax-free) yield and less interest rate risk than the U.S. bond market. And, because its 12% discount to NAV is unusually large, some mean-reversion in the discount is likely to add another 4-5% to what was already an attractive expected return.

Disclosure:I am/we are long AFB.I wrote this article myself, and it expresses my own opinions. I am not receiving compensation for it. I have no business relationship with any company whose stock is mentioned in this article.

Additional disclosure:Our long and short positions change frequently, so we make no assurances about our future positions, long or short. The information contained in this article has been prepared with reasonable care using sources that are assumed to be reliable, but we make no representation or warranty regarding accuracy. This article is provided for informational purposes only and is not intended to constitute legal, tax, securities, or investment advice. You should discuss your individual legal, tax, and investment situation with professional advisors.