The Acquirers Fund ETF ZIG When The Market Zags

The Acquirers Fund ETF ZIG When The Market Zags

The Acquirers Fund ETF: ZIG When The Market Zags

It is a deep value fund focused on long positions in fair companies at wonderful prices and short positions in highly overvalued or failing companies.

The expense ratio is high for an ETF, but less so if considered more as an actively managed hedge fund.

There are a number of maxims commonly associated with value investing:

In the short run, the market is a voting machine, but in the long run, its a weighing machine.

But when it comes down to strategy, there are multiple ways to go about value investing. For example, one might follow in Warren Buffetts footsteps and screen for wonderful companies at fair valuations. In this strategy, most of the stock picks may never be screaming buys, but they will be solid, steady, wide-moat companies likely to keep performing well for many years or even decades into the future.

There is at least one other value investing strategy, however, which even Buffett in his early years as a money manager employed known as cigar butt investing. Buffett said he likes to find fair to poor companies that are so deeply undervalued that a large short-term return would be justified just to bring the stocks back to fair value. It would be like finding a smoldering cigar butt on the ground with one good puff still left in it. Sure, it may not be as good as a brand new cigar, but it also didnt cost much to take that puff!

Enter the Acquirers Fund (ZIG), an exchange-traded fund that seeks to follow this cigar butt-style strategy.

ZIG is a long/short equity fund that began trading on the NYSE on May 15th of 2019.

Both long and short positions are rebalanced quarterly. Being a unique, long/short fund, the net expense ratio is relatively high at 0.94%. After August 31, 2020, however, the 15 basis point fee waiver will be revoked, bringing the expense ratio thereafter to 1.09%. This alone may dissuade many passive investors from the fund, but it shouldnt.

First, ZIG is one of the only ETFs of its kind, specializing in the cigar butt-style investing through which Buffett, Carl Icahn, and other billionaires initially earned their claim to fame.

Second, as Ill get to shortly, the specific valuation metric which acts as the primary determinant for selection into the fund has been shown to absolutely crush the market over very long periods.

Third, long/short funds typically require lots of research and active management, and ZIG is no exception. Investors who place their hard-earned money into this fund are getting what practically amounts to an actively managed fund in a passive fund vehicle.

With that in mind, ZIG is closer to an actively managed mutual fund or hedge fund than it is to most passive ETFs. When compared to most mutual funds, for instance, ZIGs expense ratio is quite reasonable. Compared to hedge funds, which often charge a base fee of 1% or 2% of assets under management plus a hefty portion of profits above some modest hurdle rate, ZIGs expense ratio looks downright cheap.

The fund uses a rules-based approach to ensure that none of the stocks are chosen based on the discretion of the advisor/manager. After screening out companies that are potentially manipulating their earnings or are in some unique financial distress, several more rules are applied (which, admittedly, are not explained in detail) to further narrow down prospective names.

Each potential long component is then examined for a margin of safety in three ways:(A)a wide discount to a conservative valuation,(B)a strong, liquid balance sheet, and(C)a robust business capable of generating free cash flows. Each potential short component is examined to identify(A)a large premium to an optimistic valuation,(B)a weak, distressed balance sheet, and(C)a deteriorating business and stock price. Finally, a forensic-accounting due diligence review of each of the remaining potential components financial statements, particularly the notes and managements discussion and analysis, is undertaken by the Index in accordance with its methodology; the Adviser does not have any discretion in making the selections of stocks for the Index. The Index is formed from the components passing each stage.

Thefinal stageof the screening process is to dive into aforensic-accounting diligenceof the financial statements, particularly the notes and managements discussion and analysis, to find information that may impact investment decisions. This element of the research, in particular, strikes me as fundamentally non-rules-based. Or, at least, it would seem difficult to boil this process down into a rules-based system.

To me, that is another signal of the active management inherent in this passive fund vehicle.

At first glance, the above might seem like a fairly standard modus operandi for a long/short value fund. What truly sets it apart is a certain valuation metric given particular weight in the screening process, and that is the Acquirers Multiple.

The closest metric that is commonly used is the cash flow yield – that is, cash flow per share divided by price per share.

But cash flow is too narrow and does not reflect the full profits generated by a given business. A more accurate picture of earnings (or profit) yield would be EBITDA (earnings before interest, taxes, depreciation, and amortization) divided by enterprise value (EV). EV includes not only the market capitalization of a stock but also the combined value of debt, preferred stock, and minority interest. It gives a complete picture of the total nominal value of the business.

To save time, EBITDA/EV is a decent, quick-hand way of calculating something similar to the Acquirers Multiple, and yet it isnt exactly the same as the AM.

Carlisle and his Acquirers Fund (which manages the ZIG ETF) screen for companies trading athighAcquirers Multiple yields andlowAM ratios. He says these are the companies that are most likely to be the targets of acquisitions by other firms, whether private equity or competitors. Since acquiring firms almost always pay a premium for the acquired firm, the idea is to get in on these firmsbeforethey are bought out in order to enjoy any potential windfalls from being acquired.

Profitable but deeply undervalued companies do not stay that way for long. Either the profits dry up, justifying the low valuation, or the stock price bounces back to revert to fair value. Sometimes it is an acquisition of the company that spurs that reversion to fair value.

This strategy is not mere theory. It has been backtested, and even over very long periods, it trounces the market. Here, for instance, is the Acquirers Multiple Strategycomparedto the S&P 500 as well as Joel Greenblatts Magic Formula strategy:

$10,000 invested using The Acquirers Multiple strategy would compound to

Of course, the usual disclaimer is merited here: Past performance is no guarantee of future results. But it is stunning that the strategy has been able to beat the market so profoundly over that 44-year period.

A full list of the holdings, both long and short, can be found on the Acquirers Fund website. But just glancing at the top ten holdings, one immediately notices a heavy weighting toward the financials sector. Eight of the ten are either banks or insurance companies. 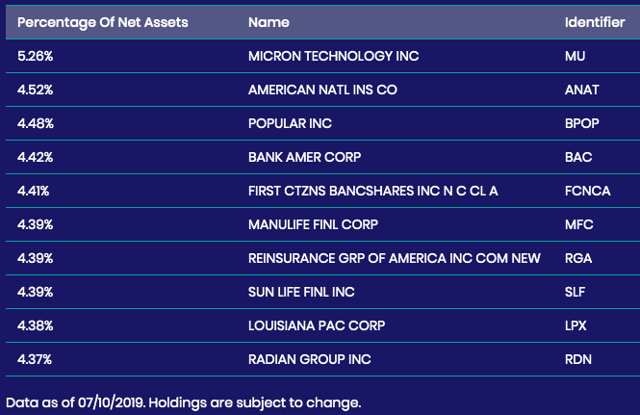 In fund founder Tobias Carlisles view, financials as a sector is undervalued and has been so since the Great Recession.

It certainly does give me pause seeing such a strong tilt toward financials at this point in the business cycle, especially since many of these companies (besides American National Insurance Co. (ANAT) and a few others) cut their dividends during the Great Recession. But here I will refer back to the screening process. Each of these companies has been screened for valuation, balance sheet health, and reliability of free cash flow. Presumably, that means that, going forward, these companies management teams have become more conservative and the chances of dividend cuts are much lower than they were leading up to the Great Recession.

In sum, ZIG is a good way to gain exposure to a basically actively managed deep value fund. Most of its long holdings do pay a dividend, meaning that the fund will most likely pay out a distribution to shareholders of 1-2%. It certainly isnt much as of now, but presumably, if higher dividend yielding sectors became attractively valued, the fund would pick up more of those names and its yield would subsequently rise.

I would encourage you to watch Tobias Carlisles talk at Google on deep value investing and the Acquirers Multiple if you havent already. You can find ithere. It explains the thinking and philosophy behind this fund.

ZIG provides investors an opportunity to practice cigar butt investing like Warren Buffett did in his early days. If buying fair companies at wonderful prices is good enough for Buffett (even if he no longer invests this way), it should be good enough to earn at least some investors capital.

It has earned some of mine, although I will want to keep an eye on how its holdings change from quarter to quarter for a little while before fully deciding on my comfort level with it.

Disclosure:I am/we are long ZIG.I wrote this article myself, and it expresses my own opinions. I am not receiving compensation for it (other than from Seeking Alpha). I have no business relationship with any company whose stock is mentioned in this article.